Kono managed a whopping 78 front split spins in one minute, as well as 60 360° horizontal spins in the same amount of time. The Japanese schoolgirl, who also has competed in gymnastics competitions, tackled both records at the FlyStation Japan tunnel, a 14.8ft (4.5m) recirculating tunnel built by Tunnel Tech in 2017. 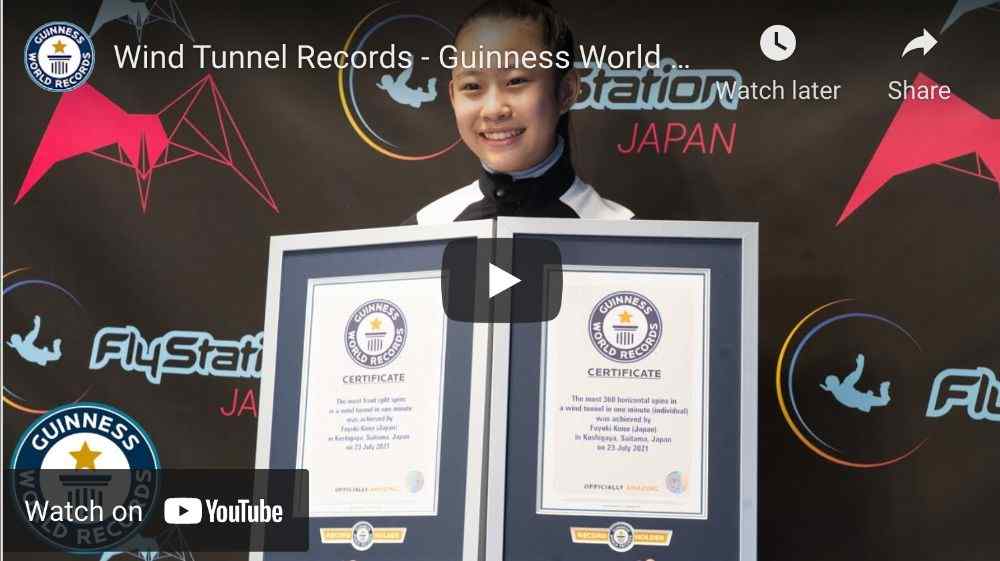 While several other FlyStations have been announced or are under construction in Japan, as of last report the FlyStation Japan tunnel is the first and only operating wind tunnel in the island nation.

Kono began skydiving in Australia while studying abroad back in 2018. “It was a completely new feeling (floating inside a wind tunnel), and I was hooked. I haven’t stopped since then,” Kono told the Guinness Book of World Records.

Just a year later, she won the Freestyle Junior Intermediate bracket at the 2019 Australian Open Indoor Skydiving Championships in Sydney. The 2019 Championships were the biggest in the history of the competition, which has been running since 2015. Nearly 90 teams and over 150 competitors came from around the world to compete that year. You can watch a highlight reel of the 2019 Championships HERE.

Because Japan’s indoor skydiving scene is quite minimal, with only one tunnel, Kono eventually decided to study in Australia long-term to continue to pursue the sport competitively, but the COVID-19 pandemic threw a wrench in her plans. “I could no longer compete, which caused me to not only lose my confidence but also made me want to give everything up,” she said.

Luckily, Kono’s coach kept her inspired by asking her to consider attempting Guinness World Record titles in lieu of competing. “At first, I thought I was never going to break [the record], but when I tried, I realized I might be able to,” she said.

She added that her motivation for attempting these records was largely to regain her own confidence in wind tunnels, but also to spread awareness about the beauty of indoor skydiving. “No matter where you go in the world, people doing indoor skydiving are kind and easy-going,” she said.

She spent around three months preparing to break the records, repeating the spins over and over to dial them down to a science. “Because the wind blows from the bottom up, a slight glitch in position could easily put me off balance,” she said. “You can easily go off-center, and you could even hit the wall if you’re not careful.”

She added that her parents were integral in her success in scoring the records. “My mom, for instance, prepared meals with a balanced diet. My dad asked me whether I want to change the suit or wind level when I wasn’t performing at my best,” she said.

“They were subtle in the way they supported me, which was immense. If they tried to support me more directly, I think I would’ve been annoyed! So I’m really thankful to my parents – I don’t think I would have broken these records had it not been for their support.”

Kono reportedly has now set her sights on a third record, though she declined to say exactly what that record is as of yet.