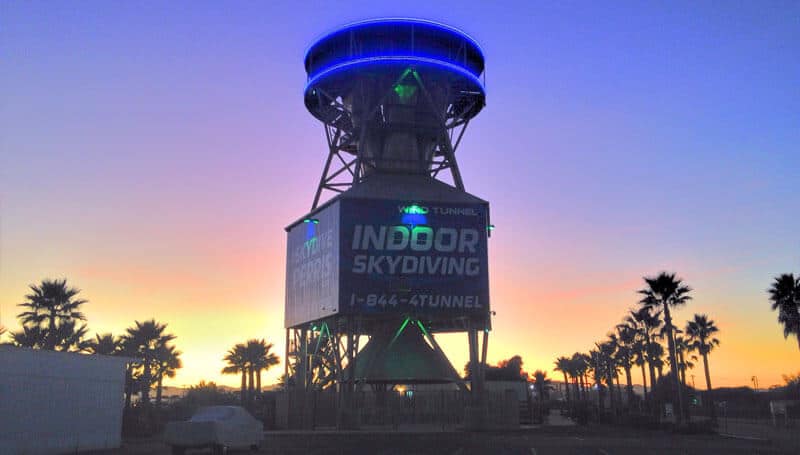 Like SkyVenture Arizona, this tunnel is located on a popular skydiving dropzone, Skydive Perris, and is the only wind tunnel located at a dropzone in California. As a result, it attracts a high level of skydiver traffic and is perhaps the best indoor skydiving California location for flyers who wish to train for outdoor flight, but it remains a suitable tunnel for all ages and skill levels. The facilities also house a restaurant & bar, The Bombshelter, an in-ground swimming pool, bunkhouse, RV hookups, and camping sites. There is also a pro-shop, Gold State Gear, and an on-site house (with 24 beds) that large groups can rent out, dubbed the “International House Of Parachutists.”

Due to its proximity to Los Angeles, many Hollywood celebrities, including Tom Hanks, Miley Cyrus, Kendall Jenner, Tom Cruise, Patrick Swayze, James Corden, and Cameron Diaz have used the Skydive Perris / Perris Indoor Skydiving facility at one time or another. Scenes from films including Transformers, Godzilla, Shoot ‘Em Up, Iron Man, and Charlie’s Angels have also been shot at this facility.

Average rating of 5 from 6 review(s).

We always have an amazing time at Perris Indoor Skydive! All of the instructors are top-notch and the facility is great!

Had a great time at the indoor windtunnel in Perris, the instructors are awesome and the flight was so cool.

I first came to the Perris tunnel in my beganing skydiving days to work out the little quirks. Fastest way to excell. Great coaches that fix you fast.