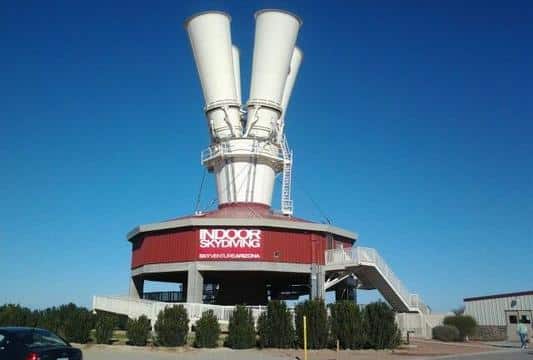 In operation since 2005, SkyVenture Arizona is one of the oldest wind tunnels in the United States, and also one of the most heavily trafficked, with everyone from professional flyers to military units coming here to train.

SkyVenture made the world’s first wall-to-wall tunnel in Orlando (now iFLY Orlando) in 1999, and the SkyVenture Arizona tunnel was designed a few years later to improve on this model. (You can learn more about the history of the vertical wind tunnel HERE). The 14-foot wide, 20-foot tall open flow tunnel sports wind speeds up to 160 mph. This may not sound incredible in the present day, but back in 2005, that was a real leap forward.

As we wrote in the history article linked above, upon its founding, “[SkyVenture Arizona] became the holy grail for skydivers and the example for the modern wind tunnel industry to follow.”

Even today, it’s considered one of the premier tunnels in the United States, not just due to this storied legacy… but due to the pristine facilities that have sprung up around the tunnel.

Situated almost dead center between Phoenix and Tucson, this historic tunnel is also a part of the Skydive Arizona complex, which is the largest skydiving center in the entire world. As a result, a variety of amenities are also housed in Skydive Arizona along with the tunnel. These include a restaurant called “The Bent Prop Saloon,” team rooms, a heated swimming pool, basketball court, fitness center, laundry facilities, showers, and more. There’s even a massage center offering myofascial release, deep tissue, Swedish, and Reiki massages!

For flyers looking to stay long-term, there is a dedicated bunkhouse, as well as a variety of tent camping sites and RV hookups.

Average rating of 4 from 1 review(s).

I'm a skydiver who has been flying in this tunnel for a long time. The staff here is amazing and the coaching is top notch. Giving it a 4 star review because its an older open model that pulls outside air. It can get chilly or hot depending on the weather, just plan accordingly. Other than that, great place to fly!