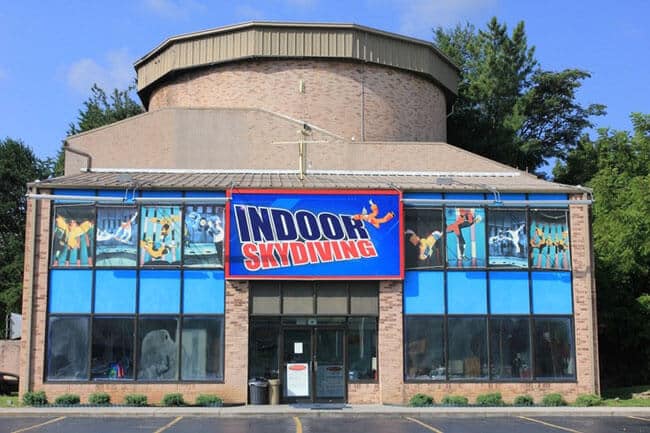 Daily: 11am to 6pm
Closed Wednesdays

Flyaway Indoor Skydiving is a 12-foot (3.7m) privately-owned wind tunnel located in Pigeon Forge, Tennessee. It is the only indoor skydiving location in Tennessee, so it is the closest indoor skydiving to Nashville. Flyaway is the second-oldest wind tunnel in the United States, right behind Vegas Indoor Skydiving in Las Vegas, Nevada. Both tunnels opened one after the other, in 1982.

Like Vegas Indoor Skydiving, this tunnel is significantly older than many of the models open today, and consequently, the wind speed is much lower, but it is an excellent location for beginner flyers. Unlike most modern wind tunnels, which feature “wall-to-wall” columns of air,  there is a small padded ring around the edge of the tunnel (outside the column of air), where participants and instructors can stand while not flying, but still be right next to the action!

No Limit but Must Weight At Least 40 lbs

Average rating of 3 from 5 review(s).

Took my 11 yr old son to the place. The trainer held him all the time, and practically slammed him on the pads when he had to get down- twice!

The place looks old, so are the suits and i was very uncomfortable having my kid wear them amidst a raging covid pandemic.

The only good thing was, i didn’t pay for the video. This was a terrible waste of money, would have been more so had i paid for a video that reminded me of the painful experience!

Go there if u are used to indoor skydiving, definitely not a place for first time fliers.

This was such a fun experience. The staff were all wonderful! I was really nervous at first but ended up having a blast and coming back later that day! Caleb was my instructor and he was super helpful and gave great feedback to make each flight more fun! The instruction alone was part of the reason for returning again! I hope I am able to come back sometime in the near future and I hope Caleb is still there instructing!

I went with three other people and was excited about skydiving as shown on their website and in the video we had to watch. The employee who went in with us held me tight the whole time except for when he tossed me on to the padding against the wall - the second time he actually dropped me on to the floor in front of the padding. One of the people in my group bought the video so I saw that I had the form that was shown in the video yet he held me close the entire time and I never got to fly up. I ended up just paying full price for him to hold me with strong air blasting in my face and on me. When I asked him after why he did that he claimed I was tense and needed to relax more. Additionally, the suites that we had to wear were raggedy and the ceiling was a bit so even if he had let go I wouldn’t have gone that high. What a disappointment and waste of money and time!

Disappointed, they let the trainee to be trained and learn in our turn and ruin the whole experience.

I've looked at a lot of websites and been to several places. I learned how to fly in Pigeon Forge and I love it! It teaches you better skills, because you can fall off the wind column, and the prices are soooooooo much better than anywhere else.