Fööni – An Indoor Skydiving Haven in the Heart of Helsinki

Nestled in the center of Helsinki, Finland, this unusual wind tunnel houses an open bar, where passersby can stop for a drink & watch flyers in action.

Fööni—named after the Finnish word for ‘hairdryer’—is one of only two tunnels in Finland. The 14-foot (4.3 m) recirculator, which opened in 2018, is the Nordic country’s most accessible wind tunnel, located smack dab in the middle of downtown Helsinki. It’s also one of the most affordable tunnels in Europe, thanks to Finland’s cheap energy prices.

Fööni’s co-owner and founder, Mauri Väistö, had the idea to bring a wind tunnel to life in 2016, but despite a year and a half of painstaking effort, Fööni nearly never happened. Indoor Skydiving Source interviewed Väistö about the history of this one-of-a-kind tunnel to learn more.

Most wind tunnels around the world are either out in rural areas attached to existing skydiving dropzones or tucked into suburban strip malls and shopping centers (like many iFLY locations). Neither option is conducive to mainstream visibility, which can be a problem for independent tunnel operators who don’t have the publicity of iFLY.

The only other tunnel in Finland (which went bankrupt while Fööni was in development and re-opened last year as Aeronautica Arena) “was also kind of in the middle of nowhere,” said Väistö. Located in the small town of Pyhtää, over an hour’s drive from Helsinki, “it wasn’t so easy to get to,” said Väistö, “so we wanted to bring a really quality tunnel right to the city center.”

Väistö and his partners had a couple of different possibilities in downtown Helsinki, but finally realized there was only one mall being built that worked extremely well for their purposes, with a subway stop even running right through its upper levels. “There were maybe eight months of meetings where we had to convince the building company to agree,” he said. “It was a long, difficult process.” In the last possible week, when the mall was almost completed and any further delays would have axed chances… the company finally agreed to let Väistö build his tunnel.

Väistö has been involved in the sport of bodyflight for over two decades, beginning his indoor flying at the historic Orlando, Florida tunnel in 2000. He’s completed over 5,000 jumps outdoors and spent over 15 years coaching, the last ten of it in wind tunnels.

He has experience with tunnels around the world, but Fööni’s ISG (Indoor Skydiving Germany) single engine is one of the best he’s flown .“It’s just really, really powerful,” he said. “Last week, we had a 12-way head down with no need for full speed. We might run around 320 kmph (200 mph), but it’s just really powerful. It could go higher. We never have any problem with speed, and we can always get more out of it than we need.”

Like most wind tunnels, Fööni has a large following of pro skydivers, but many of the regulars are actually dedicated indoor flyers. “Sure, we have lots of skydivers, but because we’re in the city center and we’re so easy to access we’re getting more and more people from outside the sport of skydiving to fly in the tunnel,” Väistö said. He estimated that ⅓ of the flyers who visit Fööni are people coming for company events (teambuilding and the like), ⅓ are first-timers, and ⅓ are professionals.

Stopping in for Beer and a Flight

One of the most unique aspects of the Fööni facility isn’t the tunnel itself, but the aviation themed-bar and café situated around it, helmed by renowned chef and pro skydiver Sami Sucksdorff. Modeled after the body of a DC-3 aircraft, the Fööni bar was actually shortlisted for the “Best Bar” category of the international Restaurant & Bar Design Awards in 2019, which takes considers bars from every country in the world. Wings and old fighter jet tanks adorn the space, the floor is painted like a local airfield, among other unique design features. The bar is also home to an outdoor terrace, with expansive views of the surrounding downtown. 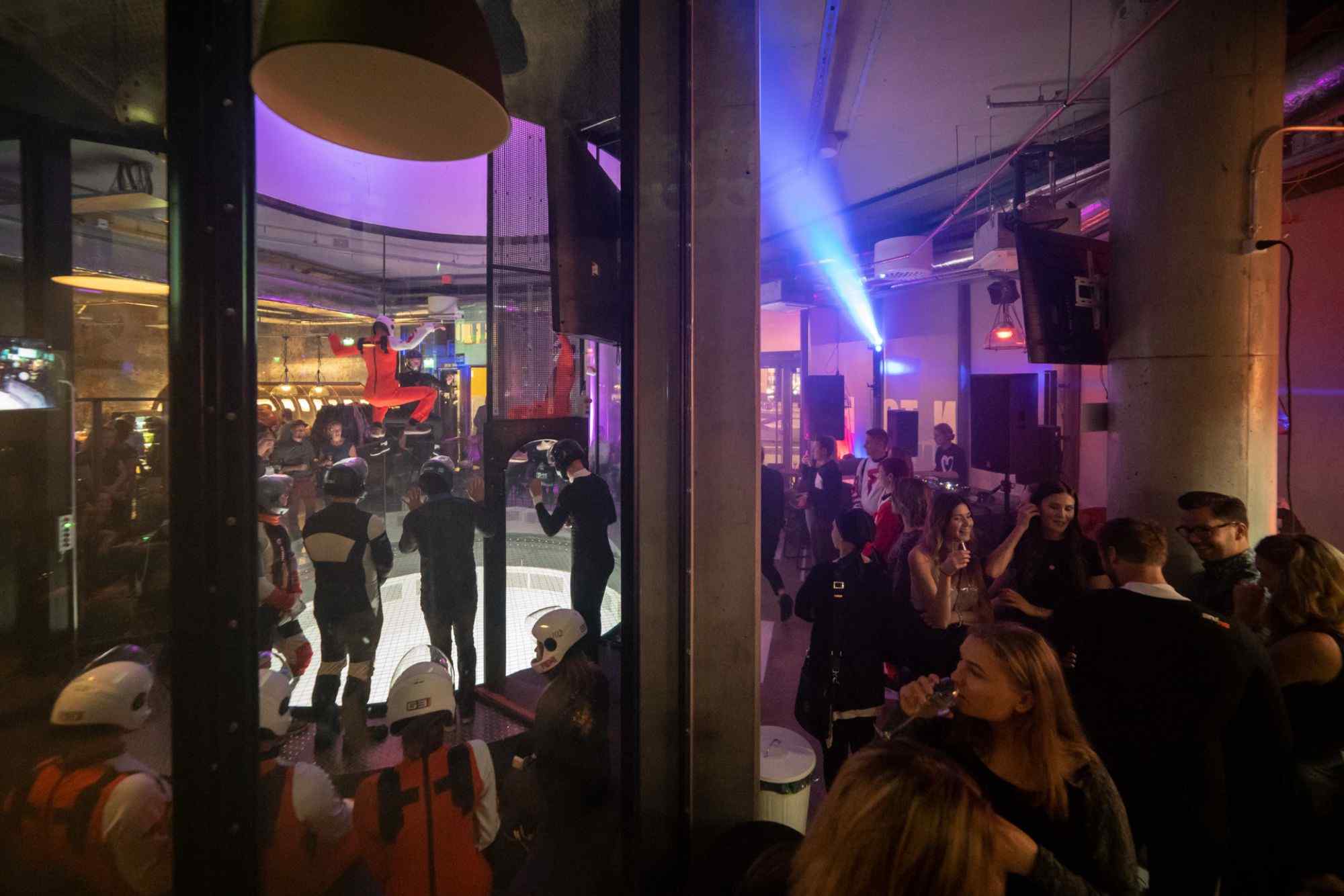 But the best part about the Fööni bar is that it isn’t just an accessory to the wind tunnel, where flyers can grab a drink or snack in-between sessions. It’s an attraction all on its own, and completely open to the public. Mallgoers and pedestrians are constantly stopping in for a beer or hot dog, watching flyers training in the tunnel. This—in addition to its central location—is a big reason why Fööni is dramatically increasing the visibility of the sport in Finland.

Oftentimes, visitors don’t even know the bar houses a wind tunnel. “People just come by off the street or from the mall all the time, just to visit a bar,” Väistö said. “We have quite a lot of people who just walk by and see ‘Oh there’s this bar,’ and then they come in and see the tunnel and they’re like, ‘Whoa? What the f*** is this?’”

Welcoming Flyers from Across Europe

This March, Fööni held the first-ever Nordic Open Indoor Skydiving Championships, which welcomed indoor skydiving teams from Finland, Sweden, and Norway, as well as several countries further afield. In total, over 60 flyers came to compete, and Väistö believes more will be there next year. “It went really well this year,” he said, “In the past when we just had Finnish Nationals here, we had maybe 12 4-way teams, a couple 2-way Dynamic teams, lots of Freestyle. But now that it’s Open, we hope to be getting more and more flyers from other countries each year.”

COVID, of course, was hard on the tunnel, like it was on all tunnels. But luckily, Fööni was able to stay open for almost the entire pandemic for professional flyers and first-timers, save for two brief closures, each lasting no more than a few weeks. “COVID was tough times,” said Väistö. “It was difficult, yes, but gladly we survived it.”

Helsinki is only 100 miles as the crow flies from the Russian border, so the war in Ukraine, too, has changed things for Fööni. Normally there are quite a lot of Russians living and traveling in Finland, and St. Petersburg, Russia’s second-largest city, is only a few hours by car. “Mostly the Russians will fly in St. Petersburg because it’s quite cheap there,” said Väistö. (The Russian city is home to nearly half-a-dozen tunnels.) “But normally whenever they are in Finland they will check out our tunnel. Now, the borders are more controlled, so we aren’t seeing many Russians here.”

Above all else, location is what makes Fööni stand out, said Väistö. “We’re right in the middle of downtown, a few minutes from the subway, so it’s just super easy to visit our tunnel. And Helsinki is not so big, so we’re also quite close to the main airfield,” he added.

This accessibility isn’t just about location, but about all that you can do and see while visiting the tunnel. It makes it extremely conducive for both local Finnish flyers to train regularly—amid busy work or school schedules—and for tourists to add a visit to Fööni to their busy sightseeing itineraries. “It’s just super easy to come and find places to stay, train, eat, anything all around Fööni,” Väistö said. “I think we are one of the only tunnels in the world located so close to a city center.

Another great thing about Fööni is that it offers some of the cheapest bulk flight packages in Europe, thanks to Finland’s electricity prices being locked in until 2023. “We’re in a lucky situation where electricity doesn’t affect us,” Väistö said, “and many other European tunnels are struggling with electricity costs.”

The tunnel’s 10-hour bulk packages for foreign flyers are currently running at only €380 per hour. These packages also include lunch each day, airport transport, and a complimentary t-shirt. Readers can learn moer about Fööni and plan a visit on the tunnel’s website.